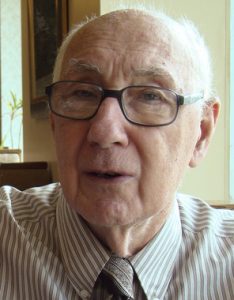 An engaging storyteller, accomplished gardener and precision woodworker, Jim Maguire passed away at the Dearness Home on May 27. He was in his 91st year.

Jim was born and grew up in Belfast, Northern Ireland, where he remembered spending Saturdays walking to town with his father and visiting the pet store to “talk to the parrots.” He would play cricket in the street with friends, and when he got older, he would wander up to the mountains nearby and pick bluebells. “My mother would say she never could find me,” he once recalled. His was a youth also defined by the war years. On Easter weekend in 1941, for instance, not yet 12, he rode a tram through Belfast during an air-raid, “with all these bombs falling and guns firing and searchlights and dogfights in the sky.”

In his teens, he apprenticed as a wood patternmaker at the Sirocco Works, where his father worked. After a four-year courtship that began on a dance floor in the seaside town of Bangor, he married Pat Moore in 1950. In fact, they might not have met had Pat not approached him during the “lady’s choice” part of the night. He later remembered: “I saw a group of young ladies heading in my direction, when someone touched my arm and said, ‘Would you like to dance?’ I think Pat saved me from the stampede!”

The couple and their growing family later moved to Bangor. In time, Jim established his own renovation and homebuilding business. In 1965, with four children, Jim and Pat emigrated to Canada, where they made their home in London, Ontario. Jim worked at Gudgeon Brothers until retirement. He volunteered at Parkwood Hospital and with the breakfast program at Kensal Park Public School. Retirement also allowed him to resume lawn bowling, and he joined a local league just as he had done back in Bangor decades earlier. For many years, Jim was an active member of St. Michaels and All Angels Anglican Church.

Jim’s family thanks Dearness Home staff, especially in the Oakdale wing, for their care and for the many kindnesses shown to Jim and Pat over Jim’s stay there.

Cremation has taken place, and plans for other remembrances are pending. Those wanting to pay tribute to Jim may make a donation to the Alzheimer Society in his memory.